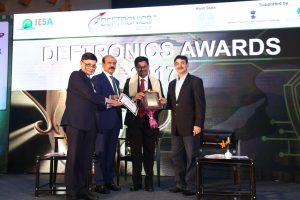 A stable government, a popular PM – and a unique strategy for boosting the economy…Make-In-India is the clarion call which is pulling together investments in the strategic sector. I looked at the black boxes made in SLN Technologies – my board colleague Anil M’s company – at Deftronics with pride. Our made in India products were touching different parts of the sector – and we could see the build up towards a strategically self-sufficient India.

India has been one of the largest import market for defence equipment – now the Make-in-India policy, with the combination of Defence Offset program and the Preferred Market Access policies, is reshaping it as one of the largest manufacturing hubs in the world. Of course, the full vision will take time in realizing – but the fact is we had a mountain to climb and no time lose, and the nation has started ahead decisively.

Over the last few years, there has been a significant rise in the private sector participation in the strategic sectors of Aerospace and Defence. Technology partnerships, JVs are reshaping the landscape of the India based defence manufacturing. Partnerships are going beyond the 70’s era relationship with Russia – we now are seeing partnerships with USA, Israel, France …and more.

I recall meeting Mr Charles Humphry, COO, Thales India at the French embassy – and his wish for appropriate supply-chain partners in India. Clearly, a number of global players are looking at expanding tie-ups with Indian companies.

We are seeing the Tata group tie up with US-based firms Sikorsky Aircraft, Lockheed Martin and Boeing; Kalyani Group has led the pace with its missile making unit with Israel’s Rafael.

It was a privilege to share the dais with leaders like Baba Kalyani – Kalyani group and Israel’s state- run Rafael Advanced Defence Systems had commissioned a Rs 70 crore anti-tank guided missile production facility earlier in the month at Hyderabad. Kalyani Rafael Advanced Systems, the joint venture between the two with 51 per cent ownership resting with Kalyani group, would be the first private sector entity to manufacture such weapon systems in the country.Kalyani group chairman Baba Kalyani said the JV is ready to supply the missile, Spike, to the Army, and 90% of the components would be manufactured locally.

One of the Make-in-India Success Story is Brahmos Missile system – the supersonic cruise family made by Brahmos Aerospace. Over 200 Indian enterprises -small, medium and large – have been associated with the BRAHMOS project. I recall the respect with the Taiwanese escorts at their defence R&D labs talked of BRAHMOS. It is a versatile missile that has excellent anti-ship and land attack capabilities that builds its position as a powerful 21st century tactical weapon. The total order value for BRAHMOS at present stands at over $6+ billion. Once the 2.5 ton Brahmos arms the Sukhoi-30 fighter, it will put India in a unique position as no other country in the world has integrated this missile system with a strike fighter for undertaking long range combat missions. And the next generation variants will be evolutionary and extend the capabilities to other air platforms of the lIAF.

Clearly, the direction is to make the nation self-reliant, self-sufficient strategically…For the first time, a government has come that has spoken about the ground reality – need for indigenization and the need for exports. With the private sector participation in defence as the new norm – I guess the story will clearly evolve over the future years- and future editions of Deftronics will record this journey.

Finally, let me round up this post with an exhilerating note – the opportunity to share the dais with Hon’ble Dr BVR Mohan Reddy of Cyient – and Deftronics Lifetime awardee…and our photograph from the felicitation ceremony… 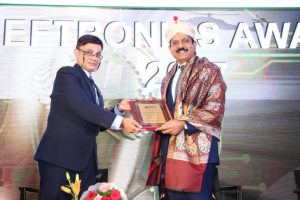