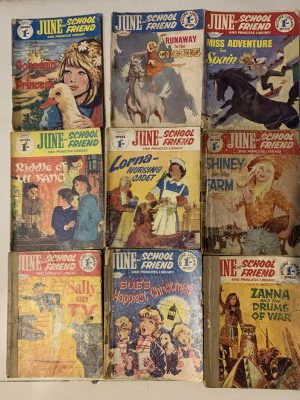 Today…I possess 498 out of the 499 titles published in the long-lost JSF picture library! This post shares how I tracked and recovered these long-lost treasures.

In 1969, My dad got transferred to Jodhpur. I still remember riding in a truck full of our household stuff from Jaipur to Jodhpur.

We moved into a small house in Shastri Nagar – near the Shastri Circle. In those days, the place was desolate with empty plots and sand – and I felt very lonely missing my friends and neighbors in Jaipur. So, my parents took me to the city and we came across a book shop – the Universal Book shop (it still exists though a shadow of the original as I remember it). It had some brand new, bright colored picture story comics and I could not resist picking up a couple of them. My dad gently bought me the same – partly to calm me, partly to feed my hunger for reading…and so I went home that evening with my first June & School Friend (JSF) comics (Mystery at Goose Hayes & Spy-hunt among the Magicians).

Schoolgirls Picture Library was a British comic published by Amalgamated Press, later Fleetway, from 1957 to 1965, when it was merged into June & School Friend Picture Library.Quite a few stories were repeated across different picture libraries (Originally School Girls picture library – and later Princess, School Friends Picture library) over the years. It had simple, inspiring stories with a simple moralistic ending – and I simply loved them. We found several 2nd hand copies at another book store that I added to my collection during the Jodhpur stay.

As time went by, Dad got promoted and transferred back to Jaipur – and then destiny took us to other journeys. And comics – including the new JSFs were no longer available easily in bookshops. I recall that the 2nd hand bookshops and circulating libraries still had these available in mid 70s – and yes, I picked quite a few of these at the Daryagunj Kabadi bazaar in the 80s…but with time these rare comics were just not available anywhere.
In 2010s when we discovered internet and its wonderful treasure trove of digitized comic collections of the past, I scanned far and wide for the JSFs. None were available! Even the original Fleetway publishing house had downed its shutters long back!.

Now and then, a few titles were coming up for sale on Amazon and eBay at exorbitant prices ranging from $ 5 to $20! And at these prices were obviously beyond my reach!!

In 2009, It was by chance that I came across a blog on British comics on the internet – and I shared on it that I had nearly 80+ JSFs with me – and that I was planning to digitize them. Lima Soris from Sri Lanka took the cue and wrote to me asking if I had specific titles. I confirmed and shared a digitized copy with her (a skill that I got as the product manager for HP Scanners). I still remember that title as “Aunt Jemima on warpath” – the humorous antics of a super-charged aunt with her for harrowed nephews and nieces!

Lima was thrilled – and asked for some more titles which I shared – subject to the simple condition that it was not for sale as I wanted to keep life simple and not enter any copyright issues. As it turned out, Lima was a JSF fan – and as passionate about it as me. She also had a list of titles that were published for JSF , Princess and Schoolgirls picture library. This became the master list thru which we tracked.

In the years, 2009-2010 we built a small group of JSF lovers – Lima in Sri Lanka; Imraan in Australia, Gail in New Zealand, Michelle in Malta and each of us had some of the missing copies.

Between us, we set a simple barter process – the group would share their stories as photocopies or (, in case of Michelle) photos, and I would scan, digitize, stitch and create a pdf that we would share between the group. The understanding was clear – it was not a commercial deal; we were just sharing for the reading pleasure between this handful of JSF lovers.

Each time a parcel of photocopies came, I would read the stories, then identify the missing, damaged pages – scan , check the scan copy, create a stitched copy and update notes on what was missing – a title cover , a missing last page, a clipped page somewhere…and work the years locating and correcting the defect, wherever we could. The finished digitized titles were shared across all 5-6 of us.

It emerged that of the 800 odd titles that were published in these different publications over the 60s, there were several stories repeated under different titles and different publications. We meticulously researched and marked these duplicates and continued our search. As we discovered by 2012, there were 499 unique stories of which we had collated 498 stories! Even the missing title was likely a duplicated story!!

We got some titles thru comicbook plus ; most were shared by the internet friends. By 2011 mid – I had got over 400+ titles.

Many of the stories we got were having a missing cover. I had been tracking the titles offered for sale on Amazon – and would pick up the title covers from there and digitally stitch it with the stories I got to complete the picture book. In case of ‘The riddle of the bird island’ – I got the story in two parts from Lima from Sri Lanka and Michelle from Malta – and then digitally edited it to complete the story!

Imraan helped the last mile enablement and bought some of the missing titles off the net and shared it back via Lima. Lima was the persuasive one and I think the world owes her for her passion in pushing and pleading to enable the copies to come to her. 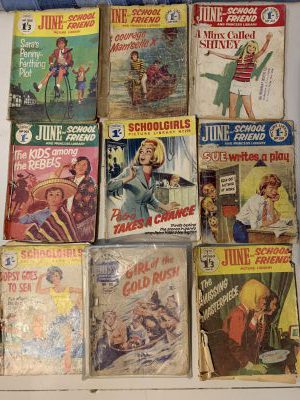 It was an amazing moment when on 25th May 2012,  I had collected the  last of the 47 Sue Day stories published in these series. The adventures of Sue Day and her friends and family were simple and heart-warming and loved by me and my mother. What a pity that the world has missed out on these stories – and how fortunate I am to have pulled all of these out of obscurity.

By early 2013, we had located 495 of the total 499 stories. I shared the list of these missing titles with everyone in the community.

And ,then I got the missing (Schoolgirls #63 Fleurette ) story from Comicsbook plus site; ‘Miss Adventure in Spain’ from Judy Perry, USA as a return gift for sharing some JSF stories ( I believe the generous lady actually bought it for me from note and sent me the story free-of-cost as that was what I had done, share my collection without any commercial interest)!

Finally, mid 2013, I saw that one of the missing stories was published in a Schoolgirls annual – and that annual was available in a UK store. I contacted a young friend in UK – and I bought that annual for delivery to him. He arranged it to be shipped to me ( his father is a neighbor and a close friend).

Today – I am only missing Zanna of the Forest story in my collection. Lima & I  do suspect that it is possibly a repeat of another Zanna story from our collection, but we do not have any substantiation. If any reader of this post comes across this title or has a view on this – would appreciate if you can share it with me.

I am sharing the list of the stories in the excel file here for your reference. Please refer to the Master sheet and feel free to filter as required to drill into the database. For those of you who are interested, you can browse thru some of the stories on the Comicsbook plus site.

(Incidentally, I visited Jodhpur in 2019 – and one evening went on a memory tour to Shastri Circle – now densely populated with eateries and crowds where there used to just sand-dunes. I walked over to the old house. 50 years – a lot had changed…but I had a lump in the throat as I interacted with the current residents and looked at the old place which held such lovely memories for me, seeing in my mind eyes a young schoolboy sitting in the (now-cemented) lawn and reading his story book…)…

6. Kabaadi Bazaar- the Sunday Brunch
5. The treasure trove at my door steps!
4. I never went to bed alone
3.The Search Engine with a heart
2.Discovering Paradise. The Mumbai book journey
& 1.I Changed!

My next Post :. Bunter and the Missing Magnets
Subscribe below to get alerts on my future posts – and connect to me on my social media links for my posts on life engineering inspirations.

A quote to help time till then…