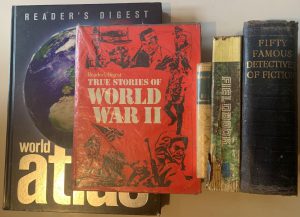 Some of the Gems from the Kabadi Bazaar!

Our family home was at Daryagunj, Delhi and my cousins introduced me to the famous Delhi Kabadi Bazaar (flea market) in our annual family visits to Delhi in the late 60’s. This market was hosted every Sunday in Daryagunj area – initially at David Street, then behind Red Fort, and eventually around the Delite -to- Golcha Cinema Stretch.

Picked up so many of my collections from there. It became a regular Sunday outing to take a trip to the Bazaar, discover and pickup a gem! 50 Famous detectives of fiction – was my first intro to the world of crime and it’s sleuths. I had originally read it in my grand-father’s collection – but was fortunate to pick up a rare copy at the Bazaar. Another gem was the Reader’s Digest 2nd world war stories in hardcover and in mint condition. Yet another was a rare copy of ‘Kidnapped’ by RL Stevenson…and another one was the Reader’s Digest World Atlas! Actually, the Bazaar’s contribution to my personal library …and life-long learning is immeasurable…

I think one of the most passionate notes on the Kabadi Bazaar has been from Vineeth Abraham, fellow bibliomaniac (http://india-inspires.com/?p=923 ). As a fellow book lover, Vineeth is overflowing with milk of human kindness and I am sharing his facebook post here with his permission.

THE BAZAAR OF DREAMS ( Part 1 )…by Vineeth Abraham

What do you sell O ye merchants ?

Richly your wares are displayed.

Turbans of crimson and silver,

Mirrors with panels of amber,

Daggers with handles of jade.

Sarojini Naidu’s poem ‘ In the Bazaars of Hyderabad “ starts with the lines quoted above, a paean to the bazaars of the former princely state in the days of the Raj . In the heart of Old Delhi is a Bazaar where the merchants sell wares even more valuable . Not turbans , tunics or daggers with handles of jade but something infinitely more precious, books. This is the famous book bazaar in Daryaganj, situated between Delhi Gate and the iron bridge on the road to the Red Fort, with a section branching out on Asaf Ali Road and extending up to Delite Cinema. The area is steeped in history with several historical monuments situated within walking distance including the Delhi Gate , Turkman Gate and the Red Fort . Nearby in Ballimaran in Chandni Chowk is the haveli where the greatest of Urdu poets, Mirza Ghalib, lived the last ten years of his life. A fitting location for the bazaar of dreams, open every Sunday when the rest of the bustling market is closed. Second hand booksellers from every corner of Delhi gather here on Sundays to sell their wares to a motley crowd of students looking for cheap textbooks, tourists who have come to gawk at what is rumoured to be Asia’s biggest book market and of course the die hard book collectors and book lovers eagerly sifting through mounds of books for that rare first edition, out of print classic or just some much loved tome from their childhood which they have been searching for for years without success.

Daryaganj is a bazaar that never disappoints the ardent book lover. It is Ali Baba’s cave, Alladin’s lamp, El Dorado and Shangri La all rolled into one. Search long enough and hard enough, and there is no book you will not find. All you have to do is believe and persevere. I know , because between April 1989 and May, 2017 , I visited the bazaar every Sunday , rain or shine, in sickness or in health, except for the brief periods when I visited my hometown in Kerala. In almost 29 years of my regular pilgrimage to Daryaganj, I managed to find books , and comics, that even in my wildest dreams I never thought I would ever lay my hands on. It was as if the Gods of Daryaganj would reward the supplicant who prayed and visited hard enough and most importantly, believed. As a non church going Christian I was often asked by relatives, friends or acquaintances, which Church I visited . With a straight face I would reply Daryaganj Cathedral, leaving them scratching their heads and wondering which church that was , until my long suffering better half would explain what I meant. The comment though was only half in jest. Daryaganj was my Cathedral and I was part of a unique and special congregation that visited the shrine every week.

As a Government servant working in a Government establishment, I hardly came across any book lovers or voracious readers among my colleagues and friends in office. There were several who shared my other passions, music, movies and cricket, but very few readers. The conversation in Office usually revolved around files, imbecile senior officers, salary raises, pay commissions, DA payments and the cost of flats in various locations in Delhi. Plus politics, about which everyone had very loud and vehement opinions which brooked no opposition. The few readers I did meet in Office or near my home depended on me to get them books and I used to visit Daryaganj every week carrying ‘ want lists’ of four or five people and the best part was that I was usually able to obtain the wanted books, dirt cheap, within the span of four or five visits. The unique boon that the Gods of Daryaganj bestowed on me was that in Daryaganj I met several kindred spirits, die hard book lovers, who went on to become close friends. With them I could discuss books and comics to my heart’s content, share and exchange books and generally find a haven from the usual conversations in my circle My worse half usually described these book loving friends of mine as the bunch of lunatics who shared this crazy love for books with her loony husband. Fellow book enthusiasts will have faced similar situations among their friends and family and will doubtless sympathise. Enlightened beings like us often have to face the jealousy and ire of lesser mortals . 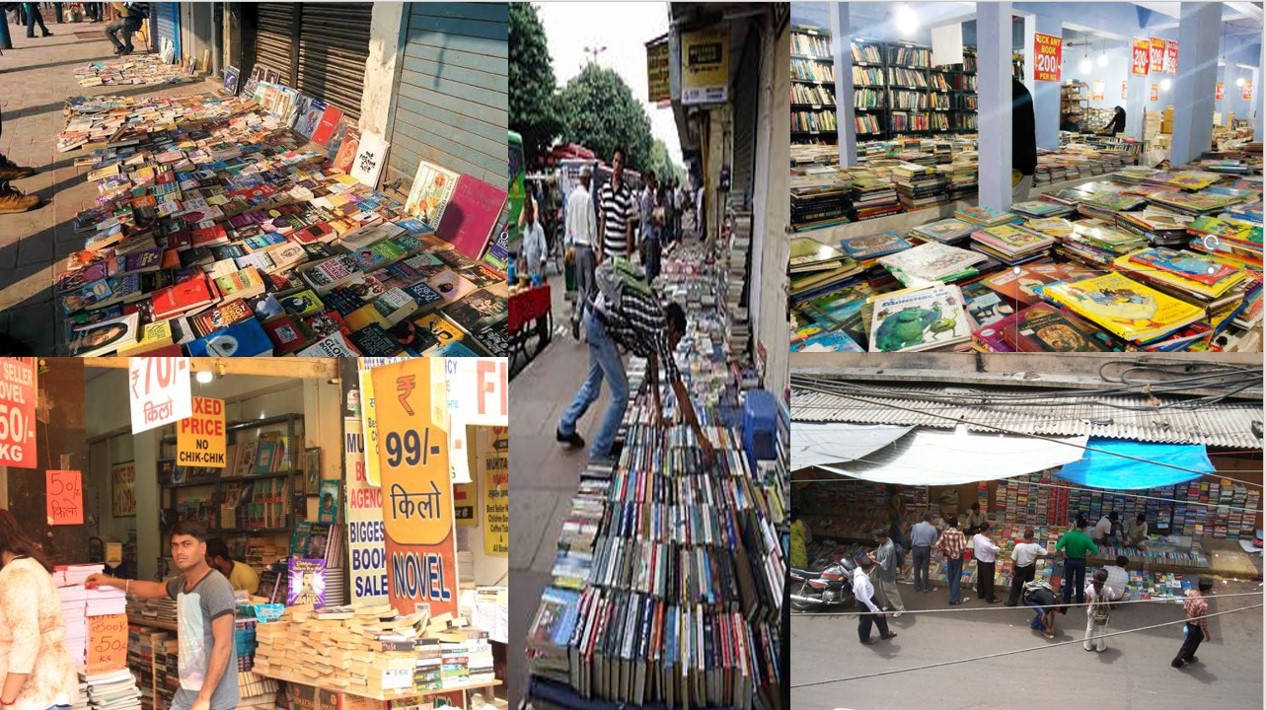 When I first visited Daryaganj in April, 1989 I was a bachelor living in a poky little flat with four other roommates, all friends from my hometown. What with the pollution, the constant hullaballoo of the concrete jungle, the congested flat and tasteless food ( because we prepared it ourselves), I was severely homesick for the wide open spaces, the scenic beauty and the food of God’s Own Country. It was then that my roommate Darvin told me about Daryaganj Bazaar . He was the one who took me there for the first time on a Sunday evening in May, 1989 and it was as if I had discovered Paradise. Soon I was visiting every week , reaching there at 7 am and returning only at around 5 pm , tired but happy , and carrying a bagful of books. It would be truthful to say that if not for Daryaganj I might have packed my bags and shaken the dust of Delhi off my feet within a year of arriving there. Ultimately I spent more than 28 years there and Daryaganj was the life raft that I clung to in the stormy sea of modern metro life.

Apart from Daryaganj I used to frequently visit other second hand booksellers all over Delhi, from Karol Bagh in the west to Laxmi nagar in the East, Delhi University and Ashok Vihar in the North to Saket and Vasant Vihar in the South and , of course, Connaught Place in the middle. Almost all these sellers used to set up shop in Daryaganj every Sunday. Soon I was a familiar face and all the book sellers knew me by name, and also the books I was searching for. I would frequently get phone calls during the week from one or the other informing me that they had obtained a bunch of Wodehouse hardcovers , a uniform edition of 25 odd Rudyard Kipling hardbacks , a stack of hardcover poetry anthologies or, on one delirious occasion, a collection of over 75 vintage western novels, just to cite a few examples. And of course the comics . I used to get first go at all the old vintage comics that used to land with them from Dell and Gold Key comics from the fifties and sixties, old DC and Marvel comics , Indrajal comics, Fawcett and Charlton and Classics Illustrated and a thousand more. All for the princely sum of two rupees to five rupees. Nowadays , where every old comic or book is touted as ‘ rare’ and valuable ( or ‘rearr’ as the present day sellers pronounce it ) , nothing sells for less than a hundred rupees, irrespective of the condition of the book. Those were the days, my friend. We thought they’d never end. How wrong we were…

The book sellers had their own methods of classifying and sorting books. One of my regular sellers was a Photographer before turning to the second hand book business when smart phones and computers resulted in his being unable to earn a living at his chosen profession. He knew hardly anything about books but used to consult me and was a very quick learner. He used to obtain a job lot of books and would call me to his godown , which was near my residence, where we would together sort the books into different heaps . ‘ Thrillers’ and ‘Mysteries’ would go into one heap, ‘ Westerns’ into another, ‘ Children’s books’ into a third, ‘Coffee Table books’ into a fourth, ‘ Travel’ ( pronounced Trayvell by him ) in yet another and ‘Classics’ ( pronounced Claysicks ) into the last. My reward for helping him was first choice at any book that I wanted which he would sell me at a substantially lower price than he would to other customers . I got several beauties from him including coffee table books, lovely cricket books including a first edition of Sir Donald Bradman’s 1951 autobiography ‘ Farewell to Cricket’ signed by the author, loads of classic British comic annuals and literally hundreds of vintage novels from several genres. The man had only one quirk I could never cure him of. He got a hardcover copy of Ruth Rendell’s mystery novel ‘ Fear a Painted Devil’ the blurb of which read ‘ a classic mystery novel from the new Queen of Crime’. From then on he was adamant about stacking her books in the ‘classics’ pile though I advised him to stack it with the ‘ mysteries’ which is where mystery readers were likely to look for her books. This misstacking probably explains why he never sold many of her books which mystified him, what with her books being certified classics.

Another quirk that all the sellers shared was that they differentiated between ‘ writer’ and ‘author’. When I came across a paperback book I wanted ( by Frederick Forsyth if I remember correctly ) , I was told by the seller that it cost Rupees 40. As he was selling paperbacks at a flat rate of Rupees 20/- each I asked him why he was charging more for that particular book. He replied that the book was by an author and all books by ‘authors’ were for Rupees 40/- each. Seeing my mystified look he further explained that books by ‘ writers’ were only Rupees 20/- each. I was totally flabbergasted by now. Later it dawned on me that writers of books that were in high demand were classified as ‘ authors’ and writers of other books that did not sell as much were relegated to mere ‘ writer’ status. All the sellers in Daryaganj used these nomenclatures. One lives and one learns.