It was Pratima ji who brought forward the case of 2 year old Kusum. Kusum was blind – her mother Geetha was blind – and her father had expired in an accident. Her uncle –the sole bread-earner in the family – was also partly blind!

It was a poor family that destiny had been unfair to.

With the earlier Vikram Shama’s case in mind. Pratima ji sought my help in this case at Dr SCEH.

I had continued my association with Dr Shroff Charitable Eye Hospital after the Vikram Sharma episode…thru a regular time donation as well as occasional cash donation. I was an evangelist for their work and for their cause. While success has been limited on the donation front, I guess I blame myself on my going thru a learning curve and having my time constraints. Of course, the payoff is a deep satisfaction and picking some nice friends at Dr SCEF.

When Kusum was referred in Dec 2016 to Dr Shroff, the diagnosis was that her vision could be restored – she was having ‘cataract’. The sensitivity operation would cost approx. Rs.60,000/-. 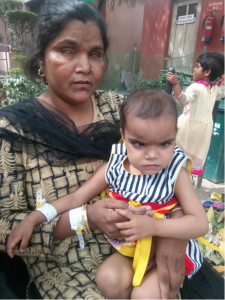 Kiran Mehta, donations manager at Dr SCEH, told me that we could give whatever we were able to raise – they were committed to enabling the operation.  This was a very big statement from Dr SCEH- it brought a tremendous feeling of empowerment in me and strengthened me in my resolve to enable this project.

Finally – Pratima ji started the ball rolling with Rs.10000/-, Praveen Kaushik and I contributed our cause cards. A little crowd-funding effort and we had raised the funding to the levels where our contribution with a matching grant from Applied Materials Giving Program enabled the program.

The bigger battle was getting Kusum’ s operations thru. We lost 3 months because initially her hemoglobin levels were too low and the operation had to be deferred once because she was having a severe cold and fever.  Then the February appointment was missed because her mother Geetha had an accident and a fractured leg prevented her movements.

Finally, the first operation happened on 7th April…we await the 2nd operation at this stage.

But there is full hope in our hearts that little Kusum will see  – and the light that she gets in her life will also light Geetha ji’s life.